From Argentina to Portugal

Okay, my socks have had the top position in my blog long enough, time to grace it with some new content. I am staying put in Toronto at the moment, so there are no immediate travel adventures to report about, sadly, though I really want to get away to the States for a weekend (somewhere... anywhere). Money is a bit tight right now, so I must be strong and remember that in March I am heading to the Azores for a week!

The story of how this trip came to be should be called "How Buenos Aires turned into Ponta Delgada". I had wanted to visit Buenos Aires before heading to Barcelona in spring, and invited my parents to come with. My mom is an avid tango dancer, so it was only natural to expect that she would join me. Dad, on the other hand, doesn't dance and doesn't eat meat, so, blimey, Buenos Aires at a glance is not a great choice for him. He did want to go on a trip with me so we all decided to compromise and head to Chile, because Chile was also in South America and apparently gorgeous. After a quick plane tickets search Chile was off the list, because we wanted to treat this trip as a last-minute relaxing whim, and 14-hour flights for $1300 are not our idea of an ideal one-week getaway. So then the conversation shifted to Peru, because Dad has always wanted to climb Machu Picchu (and who doesn't, really?). Air Canada flies to Lima non-stop, so that was okay. We left the trip preparation at that: Peru in March.

A week later we had been drinking a nice bottle of Priorat red, when Dad brought up the March trip again. We talked about direct flights again, and somebody, I can't even say who, said: "Oh if only there were direct flights to the Azorean Islands from Toronto! If only!" The Azores are a perfect meeting place between Europe and North America, since they are found almost exactly half-way between the two continents. Mom said that maybe we could scratch Peru and go to the Azores instead. Well... I ran upstairs to check tickets, and lo and behold: non-stop YYZ to PDL with SATA Portugal, $650 round-trip! Could that be true? Only 4,5 hours in the air to reach the Portuguese domain in the Atlantic?

It was true alright. We booked tickets two hours later. Only after the decision was made did I realize how NOT crazy I was about going to Peru. It was not the destination per se, of course, I want to go there one day. I just wasn't feeling it at the moment: I was prepared to take the expense of flying and lodging in Buenos Aires, speaking a beautiful language, staying out till morning, enjoying the vibe, the food, the wine. Not so much in Peru, since I know nothing about it.

I know precious little about the Azores as well, but I will find out! The guidebook has already arrived and March is drawing closer and closer.
Posted by Katya R at 6:39 PM No comments:

On the road again

Onboard, Toronto-Montreal train. I am already spoiled by free Wi-Fi and empty seats in front of me. The mind is entering a festive vacation state again: only pleasure ahead, if only for a few days - art, food, wine, snow, an apartment in Old Montreal, my parents, my tablet loaded with books. And with that, I just want to finish the horrifying Stephen King story and start with rude sensual Henry Miller. No more fear and pain, even in the books I'm reading for now. 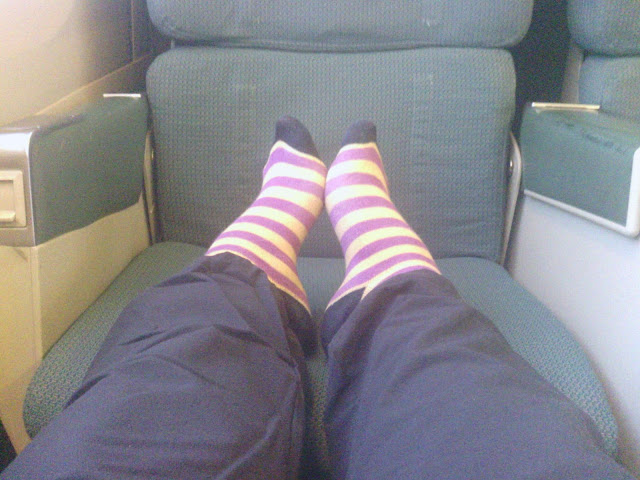 Posted by Katya R at 3:38 PM No comments: Links to this post